Home » How to Test for Fentanyl

Fentanyl and its many analogs are highly potent synthetic opioids known to be 100 times stronger than morphine, and 50 times more potent than heroin. The often unknowing consumption of fentanyl is largely responsible for the dramatic surge in drug overdose and drug-related fatalities worldwide. Recently, fentanyl overdose has been reported as the number one cause of death for Americans aged 18-45.

These overdoses have been linked to the manufacturing and selling of fentanyl-laced counterfeit pharmaceutical pills—painkillers like Oxycontin, Vicodin, or Percocet, and benzodiazepines, like Xanax or Valium—as well as fentanyl-laced cocaine, heroin, and many other substances. Drug users are unintentionally consuming fentanyl, and frequently overdosing—in part, due to lack of knowledge of what their substance truly contains.

Because of the widespread use of fentanyl in drug manufacturing, it is impossible to know if a drug is fentanyl-free without testing it. If you did not personally obtain your substance from a pharmacy, it must be tested for fentanyl.

IMPORTANT:
When fentanyl (or a fentanyl analog) is mixed with heroin, cocaine, or other substances, it is never mixed evenly. This is referred to as the “Chocolate Chip Cookie Effect.” This means powder from one side of a baggie / one side of a pill may contain no fentanyl at all, yet powder from the other side may contain a fatal dose. This is why it is important to test every bit of the substance you intend to consume before you consume it.

Please use our fentanyl test strips — along with our spot kits / separation kits —to thoroughly evaluate your sample. FentKits are specifically designed to detect fentanyl and its analogs—they cannot detect other dangerous adulterants.

This is the suggested order to fully test your substance:

A NOTE ABOUT ECSTASY PILLS:

Unless you know the exact milligram amount of MDMA in your pill, it is impossible to accurately test pressed ecstasy tablets with fentanyl strips. Even if you believe your pills contain a certain amount of MDMA, you cannot determine the amount of binder material versus active substance without sending your sample to a lab. Most dealers are not aware of the amount of MDMA in the pills they’re selling, even if they believe they are.

Our fentanyl testing strips have been acutely evaluated by a highly-skilled team of researchers at the University of California San Francisco, as well as at our own laboratory in the European Union. Our test strips are capable of detecting incredibly small amounts, even trace amounts, of fentanyl, along with many of its known analogs—including carfentanil (an analog 10,000 times more potent than morphine, and 100 times more potent than fentanyl) and acetylfentanyl (a common analog that’s weaker than fentanyl, but still 15 times stronger than morphine).

These kits—along with every other kit on the market—have limitations. There is no method available today capable of detecting every fentanyl analog. However, we can confidently guarantee that our FentKits will detect the most common and dangerous versions—more than most on the market currently do.

Our strips have been verified to positively identify the following:

METHOD ONE:
Testing everything you intend to consume
(MOST ACCURATE METHOD)

Though we understand this method is not always practical, it is the only way to ensure your substance is truly free of fentanyl and the majority of its analogs. Testing every bit of the substance you intend to consume is the best method for testing non-injected substances—including powders, crystalline, or tablets.

This requires first dissolving the whole sample you intend to consume in water. You can still consume the sample by drinking the water after testing (even with drugs that are typically snorted, such as cocaine or meth). Alternatively, you can let the water evaporate and consume the substance later. It is also possible to put your sample in a food dehydrator to evaporate the water much more quickly—within an hour or less. Evaporation without a dehydrator could take anywhere from a few hours to a few days, depending on heat and humidity, but it will not affect your substance.

METHOD TWO:
Testing the residue inside your baggie

CAUTION! This is not the recommended method for testing. The best method is to test every bit of your sample that you intend to consume (as described above). This method has a higher chance of producing false negatives than Method One. Due to the uneven mixing of fentanyl in drug manufacturing, it is still possible your drug contains fentanyl if you only test the substance residue. However, if you are unwilling to dissolve your entire dose before consumption, this is the next-best option (and still better than not testing at all).

If you are testing MDMA or methamphetamine:

HOW TO USE TEST STRIPS (once your sample is dissolved) 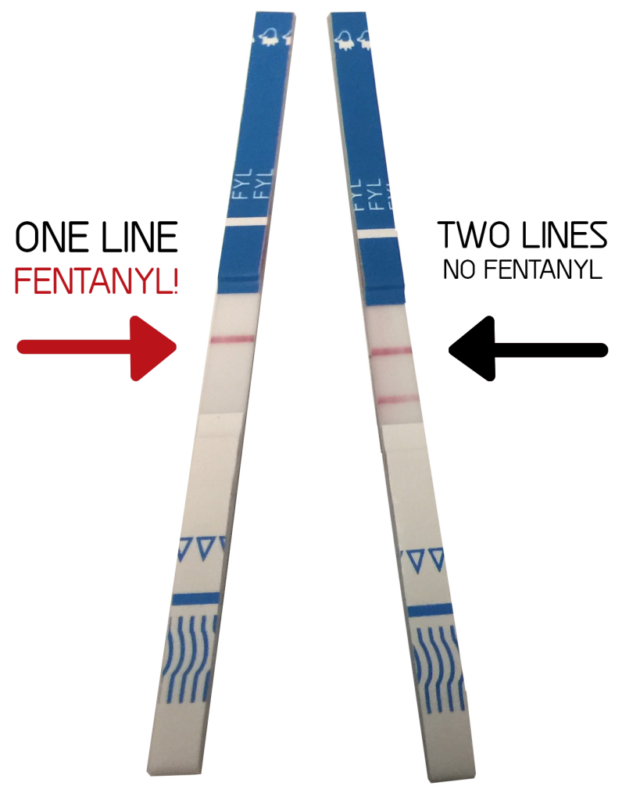 ONE red line ON TOP (closest to the solid blue end):

NO red lines, or one red line on the bottom (closest to the blue squiggly end):

Please assume any positive result indicates the presence of fentanyl, and encourage others to stop using lidocaine as a cutting agent.